I was in a good mood, having one of those English conversations, with a stranger, over a counter. I was enthusing about the mildness of the day and the gorgeousness of the autumn colours. She responded by complaining of the short days and the misery of getting up for work in the dark, and going home in the dark.
‘Yeh, it’s tough. Not sure I could live in the north.’ We were waiting for her colleague to arrive and help me with something, so, unusually, we had time for conversation. I spoke a little about our trip last winter to Tromsø, north of the Arctic Circle, where from the end of November the sun doesn’t rise at all. Our visit was in late December. S & I didn’t know what to expect. We woke bewildered at 9am to complete and absolute night-time. We breakfasted and went out to explore. How could people cope with utter blackness for weeks on end? Yet although the sun doesn’t rise at all in December, there is a suggestion of daylight. The skies lighten to a beautiful twilight from about 10am. That fades to darkest night again by 2pm. (There are graphs at showing the level of light at http://weatherspark.com/averages/28894/Troms-Norway)


That darkness wasn’t at all gloomy. Light blasted out wherever there were houses, and shops of course. Norwegians aren’t private curtain-closers like us English. They are generous with their illuminations. Light streams from big windows even of remote homes. The countryside feels friendly, fresh and alive. And social life seems to ignore conventional timetables so there are midnight concerns and plenty going on. 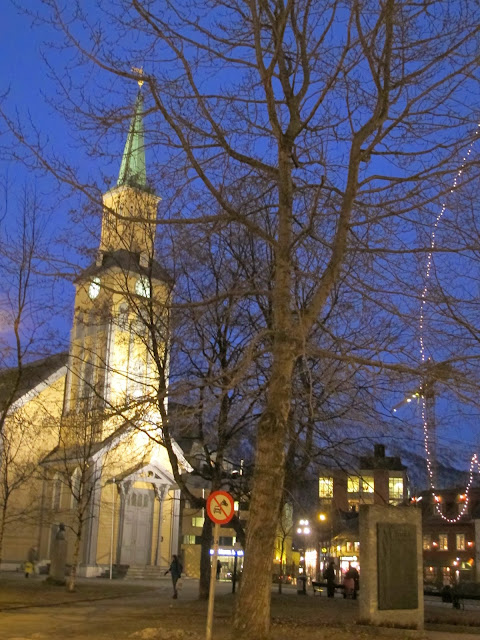 The long weekend in Tromsø introduced me – at the museum of Arctic explorers there – to the astonishing Fridtjof Nansen (1861 – 1930). He was attracted to the idea (!) of using the flow of polar ice to carry a boat right across the Arctic, and thus reach the North Pole. The theory was that a boat might leave Siberia and traverse the Arctic to emerge from the ice at Greenland. So Nansen deliberately set out to wedge his especially strong boat, the Fram, in pack ice. The plan didn’t quite work, progress was slow and Nansen calculated that the boat would take five years to cross to land again. They decided to split the party and strike out on foot for the Pole. The 14-month long expedition was treacherous, involved two of the team overwintering on the ice in a tent and spending a month on an ice floe. By the time the ice started to melt some of their navigational equipment had failed but they still managed to reach safety despite their home-made kayaks being trashed by walruses. These explorers were immensely resourceful and I couldn’t help feeling it was no wonder that the Norwegian Amundsen beat Scott to the South Pole. Scott by contrast was an amateur.


What is it that makes people set off on expeditions? I think it is the minority who go in search of glory. I guess for most it is the call of adventure, to step outside of the humdrum. To challenge oneself. To see how you’ll cope. To take a risk and see what happens. To see what fate flings at you. That attitude was one that prevailed amongst the expatriates we lived amongst in Nepal. Most were risk-takers. We were an odd unconventional bunch of kindred spirits, even if we weren’t all heroic explorers.
One such risk taker returned to Cambridge last weekend, having achieved a place in the Guinness Book of Records. Anton Wright (with Mark de Rond) managed to row the entirety of the River Amazon, a terrific achievement rowing 16-hours a day in a boat that leaked. They navigated 2000 miles over 31 days. The self-effacing Anton, who returned 18kg lighter, said that the flow of the river helped a lot and sometimes they’d make 100km in a day.  http://www.cambridge-news.co.uk/Business/Business-News/Carnal-knowledge-gained-at-a-price-in-Amazon-rowing-bid-20131015115402.htm,
Then earlier this explorer-themed week A & I went along to the Arts Picturehouse to see original footage of the 1924 film featuring Mallory and his The Epic of Everest. Again this was an astonishing tale of determination and true grit. The film had been remastered and was, of course, silent, but the shots of grinning locals and the desperate aridity of that part of Tibet helped me see again the riches of my life in England. Travel – even vicariously – does that for you.


Returning, after the film, to our tiny but luxuriant and wild little garden, I felt myself moved by the wonderful autumn colours, and it was with delight I was welcomed home by the low croak of a resident frog. An aeroplane had just flown over, and I do believe he was calling to it. Maybe he was in love.
Posted by Jane Wilson-Howarth at 03:21